Slicing from the beginning

Here's some more code. Can you guess what it does?

Let's run it to see:
"hello"[1:] goes from the e in position 1 to the end – the colon (:). So it looks like the [number:] command slices a string from the numbered position until the string's end.

Slicing from the end

What about this code?

The [:number] command, after a string, slices the string from its front – position 0 – until just before the numbered position.

Slicing from the middle

What if we wanted to get characters from the middle of the string? Say, return the "ll" from "hello"?

One way to think about this is saying we want to slice from the beginning and the end, so we'll have to put position numbers on both sides of the colon, like this: 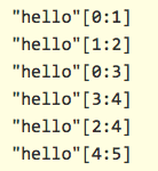 In English, that code says "hey Python! Please look at the string 'hello' and give me back the characters between position 2 and just before position 4."

Write a line of code that turns the string "san francisco" into "San Francisco" There's a few pieces you'll need: